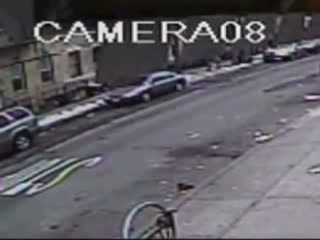 Brooklyn, NY-Assault on an officer

Published on Mar 4, 2014 The New York City Police Department is asking for the public's assistance in locating a male wanted in connection with an assault on a police officer that occurred at approximately 1537 hours on Sunday, March 2, 2014 in the vicinity of Pitkin Avenue and Lincoln Avenue in the confines of the 75 Precinct. The suspect, who was riding an ATV, was stopped by officers for driving erratically. As the officers approached, the suspect attempted to leave the scene and dragged one of the officers running over his leg as he fled. The officer was transported to an area hospital in stable condition. Anyone with information is asked to call Crime Stoppers at (800) 577-TIPS (8477). The public can also submit their tips by logging onto Crime Stoppers' website at www.nypdcrimestoppers.com or by texting their tips to CRIMES (274637), then enter TIP577. All calls are strictly confidential.
Address:Pitkin Avenue and Lincoln Avenue
Added: Mar 29, 2014
Views:8301