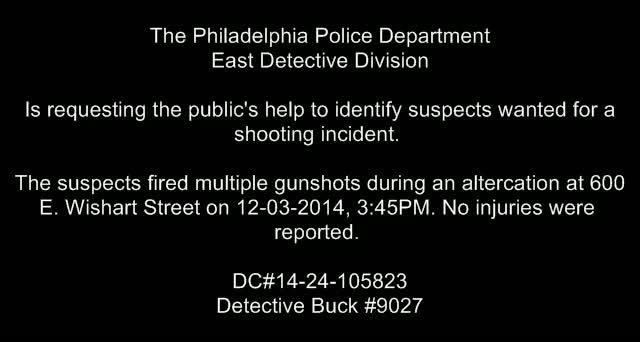 Published on Dec 4, 2014 East Detective Division is looking to identify and locate the suspect wanted for a shooting in Upper Kensington. On December 3, 2014, at 3:45 pm, Police responded to a report of gunshots located on the 6XX block of East Wishart Street. When police arrived they observed several fired casings and a tan Toyota Corolla that was struck while unoccupied on the 31XX block of North F Street. Surveillance video recovered from the area depicts three unknown males exiting a black Hyundai. One of the suspects enters the street and begins firing several shots on 6XX block of East Wishart Street. The suspect then fled and was last seen East on Wishart Street then South on F Street. Suspect Description: Black male, wearing a gray hooded sweat shirt, blue jeans, and tan boots. If you see this suspect do not approach him, contact 911 immediately. To submit a tip via telephone, dial 215.686.TIPS (8477) or text a tip to PPD TIP or 773847. All tips will be confidential. If you have any information about this crime or this suspect, please contact: East Detective Division Det. Buck #9027 215-686-3243/3244 DC# 14-24-105823
Address:654 E Wishart St
Added: Dec 04, 2014
Views:7319