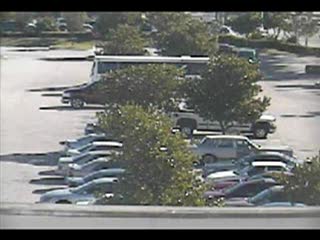 Broward Sheriff’s Office detectives are releasing surveillance video and the composite sketch of a man who burglarized a nightclub’s bus, getting away with $20,000 cash and several firearms. Investigators say it seems the man knew just what he was looking for. At around 10:30 a.m. on January 2, while the owner of X-Centric Club 525 and a few of his employees shopped inside the Lauderdale Lakes Walmart, the suspect broke into the bus that was parked outside the store. A nightclub employee, who was inside the bus, saw the man come in and reach for something near the driver’s seat. The woman confronted the suspect, but he pushed her and ran out. The suspect jumped into the driver’s seat of a dark-color, 1991-1996 model, Ford Explorer, with a man in the passenger seat. The burglar got away with three bags: one contained $20,000; the other held three handguns, a Glock 19, a Smith & Wesson 380, and an Intratec Tec-9; and the third bag contained check books. The suspect is described as a black male, possibly Jamaican, in his 30s, who wore a “Rasta” hat that appeared to be holding up dreadlocks. Working with a BSO sketch artist yesterday (Feb. 10), the witness provided a detail description for a composite sketch.
Address:X-Centric Club 525, 525 Sample Rd., Deerfield Beach
Added: Jun 27, 2010
Views:18971